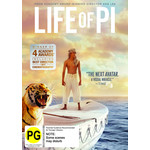 Embark on the adventure of a lifetime in this visual masterpiece from Oscar® - winning director Ang Lee, based on Yann Martel's best-selling novel. Pi Patel and his family leave India to start a new life, along with the exotic creatures in his father's zoo. But their voyage ends in disaster when a cataclysmic storm sinks the cargo ship transporting them. Miraculously, Pi survives... only to fi nd himself stranded on a lifeboat with a ferocious Bengal tiger. Adrift in the ocean, Pi learns to coexist with the savage beast named Richard Parker and, together, they face nature's majestic grandeur and fury on an epic journey of discovery.

PG Some scenes may disturb