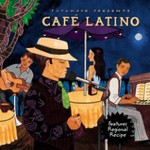 Featuring exceptional singer-songwriters from throughout the Latin world, extensive cultural liner notes and a regional recipe, Café Latino was inspired by the spirit of the tertulia, informal gatherings at bars, cafés and living rooms where music is often played and poetry and literary discourse occurs.

The album brings together contemporary singer-songwriters from Latin America and Spain. Most of the artists featured on this collection grew up listening to Latin America's Nueva Cancion (New Song) movement, a hallmark revolution in music that reached its peak in the politically turbulent era of the 1960s and 70s. Others were exposed to American folk, pop and jazz either at home or in their travels abroad. All contribute to a musically rich mix of sound that reflects the heritage of their homelands.