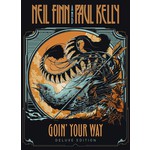 Earlier in 2013, two of Australasia's greatest singer songwriters Neil Finn and Paul Kelly, brought their iconic songs on a landmark 20+ date tour across Australia. Finn and Kelly shared the stage throughout as members of the one band, singing and playing together a selection from their rich and varied songbooks. Over 100,000 people attended the shows, which included 5 sold out nights at the Sydney Opera House.

It is one of these shows that has been recorded for the ages - for this very special live recording. Goin' My Way is a sublime meeting of talents, a once-in-a-lifetime reimagining of Australia's favourite songs. Simply one of the greatest concert experiences of this century.

The Deluxe Edition of Goin' Your Way features the 2CD audio of the performance, the DVD AND the Blu-Ray plus a stunning 54 page booklet featuring a gallery of beautiful photos from the performance, alongside liner notes from Neil Finn and Paul Kelly, reproductions of memorabilia from the tour, reproductions of handwritten lyrics and set-lists, preliminary sketches of the stunning tour artwork by acclaimed artist Ken Taylor - all housed in a beautiful rigid slipcase boasting the tour artwork from the event - exclusive to this format of Goin' Your Way. The audio is mixed by the acclaimed Bob Clearmountain, while VMA-winning director Paul Goldman (Suburban Mayhem) directed the vision - all delivered in DTS-HD Master Audio 5.1.

This truly is the ultimate souvenir of a glorious celebration of two of the most-revered catalogues in our history. As one journalist put it on the night: "Watching Finn and Kelly try each other's songs on for size reminded you why you love music."

Sad But True: The Secret History of Country Music Songwriting Vol. One