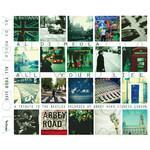 Al Di Meola
All Your Life - A Tribute To The Beatles

"Impressions of a young boy: Stretching our imagination through the imagery of lyrics and music, the writing team of McCartney and Lennon proved to be the most influential force within the world of music up to that point! Most young fans that gravitated to the guitar from the radically changing 60's era, can without question, credit the Beatles for providing the inspiration and that is why they are so inspiring today. Man, was it revolutionary!

My dream for a long time in my life was to somehow create my own personal tribute. It has taken this long mainly because these chosen pieces are almost like (in the minds of us Beatle lovers) sacred songs that shouldn't or needn't be messed with. No one can improve "Sgt Pepper," as an example. It is simply my deep affection that hasn't faded through the years and never confusing the nostalgia for substance and quality. It simply was a search to find a way to combine my world (whatever that is) into theirs, as I set out to do when I recorded the solo guitar CD of Piazzolla, "Diabolical Inventions and Seduction" in 2006.

I got the incentive in May 2012 to inquire about Abbey Road Studios. To be honest, until that point I had no clue if it was still a working studio or just kind of a tourist site. After calling my longtime friend Mo Nazam in London, he verified and confirmed that the studio was indeed fully operational as in the heyday of the 4 boys! I booked one day and that turned into three days. All through the process I was completely inspired. The place has a magic. I mean a kind of magic that transcends its nostalgic history. The sound we loved from those early recordings is the result of some serious lab technicians who rewired the heck out of everything there! My co-producer and I agree that the rooms were by far the best sounding, acoustically-perfect rooms we had ever heard! Nowhere else came close!

The first 3 pieces were recorded prior to our Ronnie Scott's week in London in May 2012. During the summer, after living with those first 3 tracks, I targeted the latter part of the month of August for arranging and practicing the rest of the pieces. At the end of the summer, I decided to give myself some time away and do something out of the ordinary like renting a house in the Hamptons. We spotted an ad in the paper for a nice looking house. The owner said he usually doesn't rent out his place but went on to say that a quite famous musician lived next door. That musician, if you can imagine, was Paul McCartney. So fate was working its magic. The minute I pulled up in the driveway, he was actually standing there on the side of his own driveway with friends. We met during my stay and had a nice chat and this exchange completed another dream of mine come true. Very friendly, respectful; again I felt like a young boy in awe. I returned later to Abbey Road Studios in November to record another four tracks in two days and then the last time in Feb 2013, we completed the recording and mixes of the final five tracks. There is so much meaning and passion involved with this project and stories that go along with it. I am just glad The Beatles existed, for in my eyes the world would have never been the same without them and here is my little example of my own personal tribute for the immense joy they brought me and the millions of others! They simply transformed modern music!"