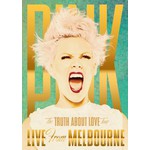 P!nk
The Truth About Love Tour: Live From Melbourne

With over 140 shows in 13 countries around the globe, P!nk brings the sold-out show and amazing spectacle of The Truth About Love Tour: Live From Melbourne to ecstatic fans on DVD and Blu-Ray. Pulling from her seven album repertoire, the show includes some of her biggest hits such as "Blow Me (One Last Kiss),"F***in' Perfect," "Try," "Raise Your Glass," and "So What" and P!nk's recent single, "Just Give Me A Reason" featuring Nate Ruess which reached #1 on both the Hot 100 Chart for 3 consecutive weeks and topped global charts all over the world, including the New Zealand, UK, Germany and Australia.

The DVD features the jaw-dropping theatrics and acrobatics that P!nk has become renowned for, collaborating with creative partner and show director Larn Poland (who also directed The Funhouse Tour: Live In Australia) to produce a visually stunning stage production that includes pyrotechnics, soaring stunts, and career-spanning hits. P!nk's seventh album, The Truth About Love debuted at #1 on the Billboard Top 200 as well as in six other countries, including New Zealand.