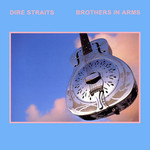 Dire Straits' biggest selling album ? in fact, one of the biggest selling albums worldwide of all time, 1985's "Brothers In Arms", helped musically define a decade. A sophisticated rock masterpiece, it reached #1, stayed there nine weeks, and is nine times platinum. Contains "Money For Nothing", the song that helped immortalize the phrase "I want my MTV", hit #1, and won the Grammy for Best Rock Performance. Today "Brothers In Arms" remains a rock essential, and now is offered as a two-disc vinyl album.