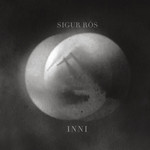 'Inni' is either the first-ever Sigur Rós live album, or second live film (and follow up to 2007's acclaimed Iceland tour film Heima). In fact, it is both: a 75-minute film and 105-minute double live album of the band captured in full flow at the close of their last tour in November 2008, here housed within one single fat package.

Originally filmed on HD digital, 'Inni' was first transferred to 16mm film and then projected and re-filmed once, sometimes through glass and other objects to give a strong impressionistic look, a feat accomplished with the help of Godspeed You! Black Emperor visual collaborator Karl Lemieux. The film was then meticulously pieced together by 'Heima' editor Nick Fenton, who chose to break up the flow with unexplained archive footage, including interview and concert material from before the band's exposure to the wider world at the tail end of the last century.

The performance captures the band playing as a stripped down four-piece for the first time since they were joined by string section Amiina at the start of the decade. This fundamental 'boiling down' makes 'Inni' a more forceful and primal proposition, much at odds with the popular misconception of the band as purveyors of instant emotional heft for film-makers in need.

The album features 15 tracks, with songs taken from all five Sigur Rós studio albums. There is also the bonus of an unreleased studio track in the form of 'Lúppulagið', which is used both over the credits of the film and as the final non-live track on the album. The DVD/Blu-ray, meanwhile, also includes four extra songs from the night.