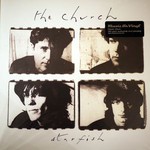 Starfish the acclaimed fifth album from The Church, originally released in 1988 is reissued on limited edition white vinyl.

Starfish went on to become their most commercially successful and perhaps critically adored of their many albums.

Originally recorded and produced in Los Angeles with Waddy Wachtel and Greg Ladanyi, Starfish included The Church's most well-known track Under The Milky Way. This 10 track album is a densely cohesive recording which gained the band global acclaim thanks to college radio success and intensive touring.