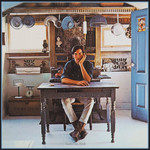 Since his death at the age of 52 in 1997, the reputation and popularity of Townes Van Zandt has grown greater by the day inspiring books, a doco and renewed interest among fans and contemporaries alike. He left behind a musical legacy of beautifully crafted songs and a legion of ever-growing grateful admirers.

Produced by Kevin Eggers and Jim Malloy at Owen Bradley's Nashville studio, 'Townes Van Zandt' includes definitive versions of the first song Zandt ever wrote 'Waitin' Round to Die' together with '(Quicksilver Dreams of) Maria, widely regarded as his greatest love song.

Side A:
1 For the Sake of the Song
2 Columbine
3 Waiting Around to Die
4 Don't You Take It Too Bad
5 Colorado Girl

Side B:
6 Lungs
7 I'll Be Here in the Morning
8 Fare Thee Well, Miss Carousel
9 (Quicksilver Daydreams Of) Maria
10 None But the Rain