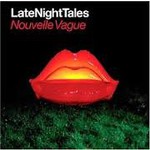 If you want to know where the heads of Nouvelle Vague are at, Late Night Tales gives you a wee glimpse through the twitching curtains of their lustrous minds. If acid house had exploded in a fetid basement in Rue Hachette rather than the repressed and sweaty confines of Thatcher's Britain, it might have sounded something like this. Torch songs, songs of redemption and remorse, heartbreak and uplift. Mood music of elevators and elevation.

The French, naturally, represent. Avril, whose Members Only album was recorded at the same time as Nouvelle Vague, is here, along with Vague contributors Camille Dalmais, who sings Nicole as Les Petroleuses and Phoebe Killdeer whose own Chaos is included. Doyenne of the early '80s art crowd and French icon Isabelle Antena makes an appearance with her ethereal bossa beat Le Poissons Des Mers Du Sud, while fellow Disque du Crépuscule labelmate Gavin Bryars, after Michael Nyman, Britain's second most famous QPR-supporting minimalist composer, makes an appearance with the arresting and arrestable Vespertine Park.

Time drifts and sways as synths and voices occasionally focus and smear. Pale Fountains, beauty lost and extinguished from history, are exhumed here alongside the vastly underrated Tones On Tail. The Special AKA, Jerry Dammers last stand, as cutting as a 10" Sabatier with What I Like Most About You Is Your Girlfriend. Art Bears lead the Art Attack, the cavalry in the form of David Sylvian, whose brittle power on A Fire In The Forest startles, while Anja Garbarek - daughter of Jan - sweeps up the leftovers. If that wasn't enough, Nouvelle Vague deliver the coup de grace with a spectacular reading of Come On Eileen (long-threatened, but finally delivered). David Shrigley shrigleys proceedings like a post-modern Major Bloodnok. Teach us to be happy, teach us control, this is the movement of fear, the wonderful and frightening world of Nouvelle Vague.