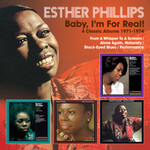 Baby, I'm for Real 1971-1974 combines four classic albums Esther Phillips recorded for Kudu Records: From a Whisper to a Scream (1971), Alone Again, Naturally (1972), Black-Eyed Blues (1973) and Performance (1974). Phillips was one of the most versatile singers of her generation, equally adept at blues, soul, jazz, pop and country. Her idiosyncratic vocal style was similar to Nina Simone although she acknowledged Dinah Washington as her main inspiration.

Starting out in the early 1950s as Little Esther, Phillips went on to score R&B hits with her groundbreaking country-soul reading of the soon-to-be standard 'Release Me' (1962) and her gorgeous version of Percy Sledge's 'When a Woman Loves a Man' (1966). It was when she signed to producer Creed Taylor's Kudu label in 1971 that she enjoyed her most consistent success with a string of brilliant and highly acclaimed jazz-influenced soul albums, four of which feature here.

The sound mixed slick, mellow soul-jazz grooves and funk moves with her impassioned vocals well to the fore. From a Whisper to a Scream boasts her sublime performance of Gil Scott-Heron's heart wrenching tale of drug addiction, 'Home is Where the Hatred Is' which is now regarded as a rare groove classic. Other highlights include her interpretations of Bill Withers' 'Use Me', Joe Cocker's 'Black-Eyed Blues' and Eugene McDaniels' 'Disposable Society'. Featuring a crack team of jazz, funk and soul session players (Eric Gale, George Benson, Ron Carter, Billy Cobham, Maceo Parker etc) everything is beautifully recorded and impeccably rendered. With superb audio, detailed liner notes and three bonus tracks including her disco-styled update of Dinah Washington's 'What a Diff'rence a Day Makes' (a US Top 10 R&B hit in 1975).

Disc 2
1.Justified
2.I've Only Known A Stranger
3.I Got It Bad And That Ain't Good
4.Black-Eyed Blues
5.Too Many Roads
6.You Could Have Had Me, Baby
7.I Feel The Same
8.Performance
9.Doing Our Thing
10.Disposable Society
11.Living Alone (We're Gonna Make It)
12.Such A Night
13.Can't Trust Your Neighbor With Your Baby
14.Brother, Brother
15.I Can Stand A Little Rain
16.What A Diff'rence A Day Makes (Single Edit)