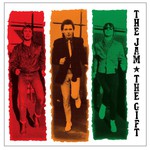 The Jam
The Gift (LP)

The band's final studio album from 1982 and first number 1 album - a departure from the harder Jam sound, including more soul and funk influences that would preface Weller's next project - The Style Council.
Featuring even more experimental styles as the band stretched out - the steel drum sounds of The Planner's Dream Goes Wrong, the sonic onslaughts of Trans-Global Express and the title track The Gift, were an indicator of where the band could have ventured. It also features one of Weller's most concise and enduring songs in Ghosts.
Includes the double A-side number 1 single Town Called Malice / Precious. - the band became the first group since the Beatles to play two songs on BBC's Top of the Pops.

Side One:
Happy Together
Ghosts
Precious
Just Who Is The 5 O'clock Hero?
Trans-Global Express