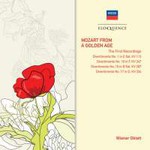 This recording forms part of a series of 10 reissues celebrating the glorious Decca recordings from the 1950s-1970s of the Wiener Oktett (Vienna Octet), made up of key principals from the Wiener Philharmoniker and the Vienna Symphony Orchestra. Five titles were released in September and the remaining five are released this month.

This release forms a companion to the 2CD set of stereo recordings of the Mozart Divertimenti performed by the Vienna Octet (Decca Eloquence 4802394). The personnel for the earlier recordings of Nos. 10, 15 and 17 differs, led by Willi Boskovsky (witness his superb solo violin playing in No. 15) in these recordings and Anton Fietz in the later versions. They are time-honoured performances, from a truly golden era of Mozart performance, here receiving their first international release on Decca CD. The 1959 stereo recording of Mozart's first Divertimento in E flat, KV 113, representing Mozart's first use of clarinets, receives its first release on CD; even in its LP lifetime it was only issued once, on a 45rpm EP record, in both mono and stereo formats. Review publications were in raptures about the release of No. 15, Malcolm McDonald writing in Gramophone (August 1956) concluding his review with the words: 'If there is a much better Mozart record in the catalogues than this, I would like to hear it.'

The engaging notes to this release, as for all those in this Decca Eloquence Wiener Oktett series, are provided by Tully Potter.

"Half century on, the golden age of Viennese music-making flares gloriously into life again [KV 334] … I would say that this classic, out of the catalogues now for more than 30 years, is still the version to have … [Boskovsky's] playing, and the playing of the ensemble as a whole, is always burnished, idiomatic, intensely alive"
(Gramophone)