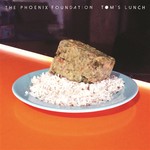 The Phoenix Foundation have wasted no time moving on to new recordings after the release of 2013's critically lauded double-album Fandango. Luke Buda felt a sense of urgency to get to work with the band's new drummer, Chris O'Connor and to push themselves into new directions.

Fandango was the end of era, the full stop on the band's journey to find pristine production perfecto-land. Tom's Lunch is the start of a new chapter and what better way to follow up a double album of mystical pop than with an EP of short snappy tracks, featuring two tracks mixed by David Fridmann (Flaming Lips, MGMT, Tame Impala).