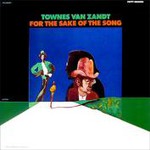 Townes Van Zandt
For The Sake Of The Song (180G LP)

Originally released in 1968, For the Sake of the Song is a reissue of Townes Van Zandt's well-known debut album. Produced by Jack Clement (Charley Pride, Chet Atkins, U2, etc.) and featuring original liner notes by Mickey Newbury, Van Zandt went on to cement his status as a cult icon among gifted songwriters such as Willie Nelson, Merle Haggard, and Emmylou Harris who eventually recorded their own covers of his songs. Steve Earle named Townes Van Zandt "the best songwriter in the whole world" and on the evidence of this record it's easy to agree.

1 For the Sake of the Song
2 Tecumseh Valley
3 Many a Fine Lady
4 (Quicksilver Daydreams of) Maria
5 Waiting 'Round to Die
6 I'll Be Here in the Morning
7 Sad Cinderella
8 The Velvet Voices
9 Talkin' Karate Blues
10 All Your Young Servants
11 Sixteen Summers, Fifteen Falls