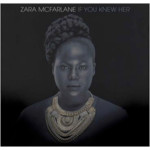 Zara McFarlane
If You Knew Her

If You Knew Her is Zara McFarlane's second album on Gilles Peterson's Brownswood Recordings. This new, emotionally charged body of work sees her blossoming as a lyrically conscious songwriter, cementing what Until Tomorrow revealed - an artist composing original songs, telling her own stories (a rarity among jazz singers), demanding attention for their daring brilliance. Eight of the eleven songs are beautifully crafted originals, which, says Zara, "collectively explores emotive stories of beauty, passion, love, vulnerability, empathy, boldness, directness and sensuality. Inspired by the many vibrant, amazing, charismatic black women in my life, it's an album that celebrates the strength of women, from the alpha female to the housewife".

If You Knew Her is a courageous step forward for McFarlane, not only lyrically, but musically. Over half the tracks are stripped bare, revealing Zara's voice in all its variety and subtlety. Leaving her full trio behind, she performs in different settings, most poignantly with just understated accompaniment from the dazzling pianist Peter Edwards or, as on the album's opening masterpiece, Open Heart, with just bass and hang. Yet when she employs her full impressive band, magic is made. Woman in the Olive Groves, one of the album's stand-out tracks, is a spellbinding thought-provoking song, and a standard in the making. Aside from her own compositions, the album includes some unexpected covers including a wonderful jazz reworking of Police and Thieves, the Junior Murvin classic. Released with an accompanying video to celebrate 50 years of Jamaican independence, it became an immediate fan-favorite and radio-choice already notching up over 37,000 views on YouTube. Angie La La, the lesser known cult classic from Nora Dean features NYC's Leron Thomas on trumpeter and vocals and will be the album's first single.

Side 1:
Open Heart
Her Eyes
Move
You'll Get Me In Trouble
Police and Thieves