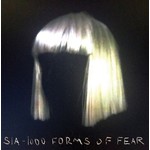 "1000 Forms of Fear" follows the notoriously press-shy pop artist's 2010 release "We Are Born." "Chandelier" has been released as the first single from the album, with "Dance Moms" star Maddie Ziegler serving as the Sia stand-in in its captivating music video.

"1000 Forms of Fear" does not feature any guest vocalists, although the co-writer of songs by Beyonce, Rihanna and Katy Perry certainly has the Rolodex to make high-profile cameos happen. "Elastic Heart," the Diplo-co-produced single from the "Hunger Games: Catching Fire" soundtrack, is included on the album.

Rage Against the Machine

Screenplaying - The Best of Mark Knopfler