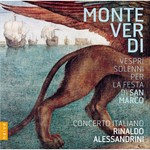 Unanimously recognised as one of the leading interpreters of Monteverdi, Rinaldo Alessandrini's recordings have become benchmark references. In celebration of the 30th anniversary of his orchestra, Concerto Italiano, Alessandrini returns to his preferred composer, creating, in the magnificent Basilica of Mantua, an imagined Vespers service for San Marco assembled from various parts of the 'Selva morale e spirituale' and gathering together the sublime Dixit Dominus, Laudate pueri, Magnificat...In doing so he has found "the expressive logic which is at the heart of the liturgies for which this music was composed". This represents Alessandrini's first volume in a complete recording of the Selva Morale.

"The most experienced Monteverdians in the business are helped by the thrilling acoustic of the Basilica Palatina di Santa Barbara, in Mantua, whose properties are closest to those of St Mark's. The cornetti and trombones sound majestic, but it is the clarity, tonal purity and vivid diction of the vocal soloists and ensemble that make this a triumph." (The Sunday Times)

"Alessandrini finds both expressive breadth and immediacy through pungent instrumental playing and a first-rate mix of solo and ensemble voices...The behind-the-scenes DVD offers some useful background as an adjunct to a superlative CD." (Daily Telegraph Five Stars)

"Alessandrini has drilled his players so successfully that they carry all the power of a chorus at full steam combined with the virtuosity of a quartet. ...Alessandrini reveals his skill with this music by realising all of it with just the right amount of atmosphere, allowing it to come alive...a marvellous achievement, and an exciting addition to the discographies of both Alessandrini and Monteverdi himself." (MusicWeb)

The Beauty Of Monteverdi