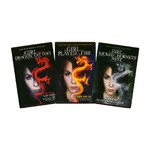 Stylish, intelligent, dark and action-packed 'The Girl With The Dragon Tattoo', 'The Girl Who Played With Fire' and 'The Girl Who Kicked The Hornets Nest' can now be enjoyed in one sensational DVD collection.

Girl With the Dragon Tattoo
Forty years ago, Harriet Vanger disappeared from an island owned and inhabited by the powerful Vanger clan. Her body was never found, yet her uncle is convinced it was murder and that the killer is a member of his own tightly knit but dysfunctional family. He employs disgraced financial journalist Mikael Blomkvist and the tattooed, ruthless computer hacker Lisbeth Salander to investigate.
Running Time: 179 minutes approx.

Girl Who Played with Fire
As computer hacker Lisbeth and journalist Mikael investigate a sex-trafficking ring, Lisbeth is accused of three murders, causing her to go on the run while Mikael works to clear her name.
Running time: 179 minutes approx.

Girl Who Kicked the Hornet's Nest
Lisbeth is recovering in a hospital and awaiting trial for three murders when she is released Mikael must prove her innocence, but Lisbeth must be willing to share the details of her sordid experiences with the court.
Running time: 179 minutes approx.