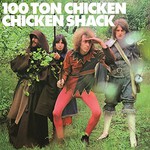 100 Ton Chicken is the third album by the UK Brit Blues band Chicken Shack. Originally released in 1969, the follow-up album of their first two albums 40 Blue Fingers Freshly Packed And Ready To Serve and OK Ken? was Paul Raymond's first album as a member of Chicken Shack. Raymond replaced Christine Perfect, who left the band when she married John McVie of Fleetwood Mac.

Terence Ibbott was in charge of the album artwork for 100 Ton Chicken, which was bizarre as always. The recordings sounded quite different and gave The Shack what they were looking for - a "heavier" sound. On the album Chicken Shack covered Clarence Carter tunes ("The Road Of Love" and "Weekend Love"), a great Freddie King tune "Look Ma, I'm Cryin'", Lowell Fulson's "Reconsider Baby" and Clarence Gatemouth Brown's "Midnight Hour".