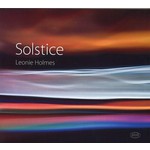 Leonie Holmes has written works for orchestra, chamber, choral, vocal and solo instrument, and receives commissions from ensembles and individuals throughout New Zealand.

She lectures in composition and music studies at the University of Auckland School of Music, and is active as a speaker, adjudicator and teacher at all levels and age groups within the New Zealand music community.
This compilation of her orchestral music spans 1997 to 2013.

Notes on the compositions:

For Young Nick - In 1769 the coastline of New Zealand was sighted by Nicholas Young, the 12 year old surgeon's assistant on Captain James Cook's ship "Endeavour". What would life have been like on board the ship for a young boy, and what would this first sight of the land Cook named "Young Nick's Head" have been like?

Ancient Rhythms - was inspired by the poem "The Journey" by Tessa Stephens. This poem was originally created as text for the choral and orchestral work 'The Journey', commissioned for the opening of the Genesis Theatre, TelstraClear Pacific Events Centre, Manukau.

Elegy - for chamber orchestra 1997. A short work dedicated to the memory of Leonie Holmes' parents Noel and Rona Holmes.