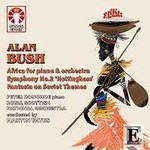 Alan Bush's stern face usually hid a tuneful heart, and in Dutton Epoch's second disc of orchestral music by this composer, the RSNO presents the popular, programmatic Nottingham Symphony evoking Sherwood Forest, Clifton Grove, Castle Rock and the Goose Fair. Also featured is Peter Donohoe's authoritative pianism in Bush's "Symphonic Movement" - in fact, a piano concerto in all but name, which he called Africa, politically inspired and based on appropriately African tunes and rhythms. The programme is completed by the popular wartime Fantasia on Soviet Themes in which a handful of Russian revolutionary songs appear in characteristic celebratory orchestral dress. Africa and the Fantasia are both world premiere recordings.