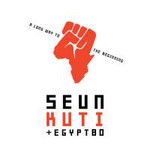 Seun Kuti and Egypt 80
A Long Way to the Beginning

"1, 2, 3, 4… with a clenched fist and a blast of his alto-sax, Seun Kuti launches into 'IMF', the opening track on A Long Way To The Beginning - his tightest, most electrifying album yet. This time around no one escapes the Afrobeat warrior's ire: not corrupt Nigerian leaders or sly western powers. Not bankers, corporate greedheads or any lying, cheating international mother***ker anywhere.

'My people are coming for what's ours,' sings Kuti, 31, in his powerful, stentorian voice. 'Going all out 'cause it's now or never, 'breakin' the chain, we gon' sever…'

It's been a struggle to get to now. There were those who criticized his decision to front his father's band; who said it was arrogant, even hubristic, to try and fill his father's shoes. This was never Seun's aim: "Fela will always be Number One," says the Lagos-based scion, who inherited the extraordinary Egypt 80 orchestra in 1997 when his father died.

And so Fela's youngest child has full-steamed ahead with his own inimitable brand of Afrobeat: a sound as compelling as it was when Fela Anikulapo Kuti first fused jazz, funk and soul with highlife and other African rhythms - but with topical lyrics and contemporary influences giving it a modern twist. So far there have been two critically acclaimed albums: 2008's Many Things and 2011's From Africa With Fury: Rise.

With A Long Way To The Beginning, we've arrived where the journey starts.