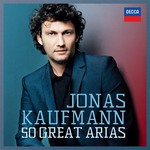 Jonas Kaufmann signed to Decca in 2007, and this outstanding collection of four recital CDs was recorded from 2007-2013. During those six years, there has been nothing but raining superlatives for Kaufmann, from critics and public alike.

Accolades for Kaufmann's Decca recordings have been plentiful, with recent awards including the inaugural International Opera Award for best male singer, three Gramophone Awards, a Goldene Deutschland Award, a Grammy, an ECHO Award, Artist of the Year from Musical America and the Bayerische Europamedaille. He also starred in the recent GRAMMY-winning production of The Ring at the Met.

Jonas Kaufmann is renowned for his versatility, and this varied selection of 50 Arias showcases his vocal flexibility in style, genres and languages. Each of the recital discs matched Kaufmann with an eminent conductor particularly suited to the repertoire chosen: initially Marco Armiliato, followed by Claudio Abbado, Antonio Pappano, and Donald Runnicles. Critics have been similarly unanimous in praising the brilliance of the supporting orchestras and conductors: "Whatever he sings is cradled by the equally refined musicianship of Claudio Abbado and the Mahler Chamber Orchestra. They're as much of a chameleon as Kaufmann." The Times (UK.)

"These four discs present Jonas Kaufmann in his vocal prime, invariably placing his glorious sound at the service of music and text. The result is a collection of illuminating performances from a uniquely thoughtful, dynamic, soul-stirring artist." Roger Pines

"Kaufmann's voice, warm and full-bodied in its middle register, has an excitingly brilliant top. It has a Latin richness, and the elements are well integrated. The German component (his home town is Munich, though you might have thought Vienna more likely) accounts for the broader musicianship that shapes his phrases and fashions his tone as an instrument sensitive to modulations of sense and sound." (Gramophone)