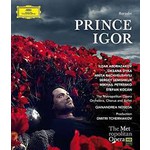 For the first time in nearly 100 years, Borodin's defining Russian epic, famous for its Polovtsian Dances, comes to the MET.

Dmitri Tcherniakov's production is a brilliant psychological journey through the mind of its conflicted hero, and his "[…] wonderful staging is dreamlike, wrenchingly human and viscerally theatrical" (New York Times).

The Blu-ray includes a "Backstage at the MET" with host Eric Owens: