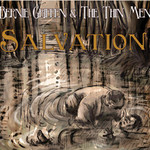 This year sees Auckland's Griffen step out into new territory with the record Salvation, recorded at Auckland's The Lab studio in May 2014. The new record sings out like a scream in a quiet night -- Bernie's characters are hard-living and hard-loving, outlaw and saviour, the lover and the man in trouble -- Bernie Griffen tells tales of adventure, loss and a life hard lived.

It's a timely follow-up from 2011's Everything So Far (Bernie Griffen and the Grifters) -- which featured the song 29 Diamonds, championed by Radio NZ's Trevor Reekie in 2011: "If there's any justice in this industry, 29 Diamonds would win a Silver Scroll, it is achingly poignant and it will travel forever."

Salvation takes the themes of sin and redemption, heartbreak, desperation and despair and wraps them up in a cloak of dark, gothic-tinged rock dragged kicking through swampy southern blues and dusty country music plains. The songs shuffle and swirl, the mood of the music as important a feature as Griffen's tales of life and love's casualties. The sound the band builds up across the album is firmly indebted to Nick Cave, Bob Dylan (of the last few decades), Tom Waits and Patti Smith who is name-checked literally in the song that bears her name. There is a real grace and poetry to Griffen's songs, particularly in the tragic drug tale of 'Girl With The Golden Arm' and the opening track 'I'm Crying Too' with it's direct and heavy-hearted lines such as "I'm tired of crying too… If you loved me, none of this would be happening".

What sets Salvation apart from other albums that attempt to capture a similar sound is Griffen's voice. Far from being a songbird or accomplished crooner, he seeks and achieves a wounded grace in his singing as he explores the darker societal corners like a tired and battle-scarred narrator. His is a unique voice on the New Zealand cultural landscape and one that should be widely acknowledged as such.