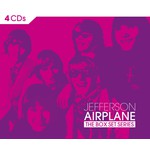 Jefferson Airplane had the good fortune (or maybe the ill fortune) of arriving on the pop scene at the end of the 1960s when rock was just beginning to flex its political and artistic side, and being based in hippiecentral San Francisco, the band went from being a ragged folk-rock group to being an experimental one, and all the shackles were thrown off in the studio, which is probably why, of all the San Francisco groups of the era, they have perhaps the most uneven catalogue. This four-disc, 44-track box set collects the group's key sides, from the early hits "White Rabbit" and "Somebody to Love" to the defiantly rebellious "Volunteers" and the graceful "Won't You Try/Saturday Afternoon." When all was said and done, the group's legacy seems pretty much locked into the '60s ethos and doesn't translate all that well into the
21st century, but the hazy nostalgia factor of those times makes this band appear to be more than maybe it actually was. Most of what the Airplane did is here, including six live tracks, so a listen should prove the case one way or the other.

CD 2
1.The Ballad Of You & Me & Pooneil
2.A Small Package Of Value Will Come To You, Shortly
3.Young Girl Sunday Blues
4.Watch Her Ride
5.Won't You Try/Saturday Afternoon
6.Lather
7.Crown Of Creation
8.Triad
9.If You Feel (Like China Breaking)
10.Greasy Heart
11.We Can Be Together