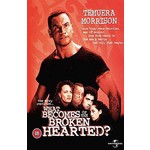 What Becomes of the Broken Hearted?

returns as Jake, The Muss in WHAT BECOMES OF THE BROKEN HEARTED?, the outstanding sequel to ONCE WERE WARRIORS.

Five years have passed and Jake has turned his back on his family. He's still up to his usual tricks in McClutchy's Bar, unaware, as he downs his latest opponent, that his eldest son, Nig, has died in a gang fight. The uncomfortable family reunion at Nig's funeral sparks a confrontation with second son Sonny, and sets Jake and Sonny on a downward spiral. One is drawn deeper into the violence of gang life, and the other begins a journey to open up to responsibility and change. But is it too late, has tragedy already struck?