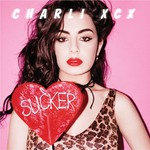 Sucker sees 22-year-old Charlotte Aitchison from Hertfordshire, return with a bad-ass floor-filler, oozing rebellion and attitude, which is set to ignite the airwaves in the coming months.
Over the last 18 months Charli's rise to international pop stardom has been nothing short of meteoric. From releasing her dark-pop record TRUE ROMANCE in 2013 to a wealth of critical acclaim, Charli has toured the globe with the likes of Coldplay and Ellie Goulding, written and featured on one of 2013's biggest hits 'I Love It' with Swedish duo Icona Pop, co-written and featured on the global, four million-selling hit 'Fancy' with Iggy Azalea and scored a global hit with her single, 'Boom Clap'.