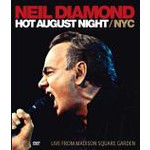 Including over two hours of live music and 25 career-spanning hits, this DVD captures the dynamic energy that has epitomized Neil's live performances for over four decades, and includes: "Song Sung Blue"; "Holly Holy"; "Cherry Cherry"; "Cracklin' Rosie"; and the world's greatest sing-a-long, "Sweet Caroline". It also features the very first in-concert release of "Pretty Amazing Grace" from his #1 album, 'Home Before Dark' - as well as an exclusive bonus feature, "Welcome Home Neil", which is a behind-the-scenes look at Neil's pilgrimage to his childhood home in Brooklyn.

Neil's eclectic & universally beloved songs - as well as his charismatic + openhearted performances of them - continue to make him an international force both as a record maker and a live entertainer.

In an impressive musical career that has spanned nearly five decades, he has released dozens of albums and sold more than 125 million records worldwide, with a remarkable track record of 15 U.S. Top Ten albums & 37 Top Ten singles.

Songs such as "Sweet Caroline"; "I Am... I Said"; the aforementioned "Cracklin' Rose"; "America"; "Song Sung Blue"; and "You Don't Bring Me Flowers" have made this Grammy & Golden Globe-winning artist a global superstar.