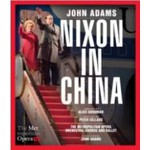 'The opera and the production may have come to the Met at just the right time to comprehend the continuing resonances of this audacious and moving opera.' New York Times

Nonesuch Records presents the Metropolitan Opera's performance of John Adams' Nixon in China, with the composer conducting, on Blu-ray and DVD together in one package. The Met's production, staged by Adams' long-time collaborator Peter Sellars, stars James Maddalena as Richard Nixon, a role he created at the opera's world premiere in 1987 and has since performed at international leading opera houses, including the English National Opera, Netherlands Opera, and Brooklyn Academy of Music. Nixon in China was recorded and broadcast live in movie theatres around the world as part of The Met: Live in HD on February 12, 2011 - 10 days after the opera received its Met premiere.

The opera's libretto is by American poet Alice Goodman, who also collaborated with Adams and Sellars on The Death of Klinghoffer. The Met's production, which was originally created by the English National Opera, features the work of the 1987 world premiere's design team, including set designer Adrianne Lobel, costume designer Dunya Ramicova, lighting designer James F. Ingalls, and choreographer Mark Morris. Nixon in China also features Janis Kelly as Pat Nixon, Kathleen Kim as Chiang Ch'ing, Robert Brubaker as Mao Tse-tung, Russell Braun as Chou En-lai, and Richard Paul Fink as Henry Kissinger. Adams, who regularly conducts major orchestras around the world, made his Met debut as conductor with Nixon in China; his opera Doctor Atomic had its Met premiere in a well-reviewed 2008 production.

"I met Peter Sellars in 1983, and he proposed the idea and even the title for Nixon in China. My first response was pretty skeptical-Nixon was little more than a butt for late night comedians by that time," Adams tells the Met's Elena Park in an interview published in the Blu-ray/DVD's booklet. "But I eventually realized it was a perfect idea, and that it was right to find our mythology in our own contemporary history."

In the same interview, Sellars says of Nixon in China's arrival at the Met: "It's very sweet after 25 years. We created it as anti-grand opera originally, and now it's beautiful that at the Met it can be genuinely grand. The work was made by a group of very young, very idealistic people. We were trying to show what opera can contribute to history, which is to deepen it and move it into its more subtle, nuanced, and mysterious corners, which might just open into more surprising and satisfying possibilities for a future."

"As a record of [Sellars's, Adams's and Maddalena's] achievement, this is a valuable document...by 2011 Maddalena was in vocal decline. Future generations will see Nixon in China as the composer intended But it gives due prominence to Janis Kelly's Pat Nixon and Kathleen Kim's Madame Mao, and it is wonderful to be re-acquainted with Mark Morris's choreography." (Financial Times)

"Maddalena (though not in best voice) portrays a more noble Nixon pushed to his diplomatic limits. The heart of the opera is Pat Nixon, portrayed by Janis Kelly with less sense of submission and a lot more depth..Given Sellars's penchant for tight camera close-ups in his video direction, the opera often feels like the intimate chamber work that, in its conflicted heart, it actually wants to be." (Gramophone)

"James Maddalena, the original Nixon, may have lost some vocal tautness, but his presentation of Nixon's complex character has grown only richer. And most of his colleagues are magnificent: Janis Kelly, shining bright as Pat Nixon; Russell Braun, wonderfully pained and sombre as Zhou Enlai; Kathleen Kim as Chairman Mao's wife, eyes and mouth dripping venom." (The Times)