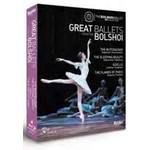 "Unashamedly traditional, gloriously staged, with a tremendous cast … pin-sharp clarity and fine sound … essential viewing. It is no exaggeration to say that even without Tchaikovsky's music, the sumptuousness and elegance of the screen images are such that one could enjoy it as a purely visual experience. Add to that one of the most radiantly inspired orchestral scores of the nineteenth century and the results are quite simply irresistible" International Record Review, March 2013 [Sleeping Beauty]

The Nutcracker, Op. 71
Recorded at the Bolshoi Theatre - Moscow (2010). Choreography by Yuri Grigorovich