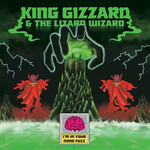 King Gizzard & The Lizard Wizard
I'm In Your Mind Fuzz

Melbourne-dwellers King Gizzard And The Lizard Wizard not only hands down win the award for band name of the week, but their paisley-coloured psych is as pleasingly trippy as you'd expect from a bunch of reptilian magic-makers. 'Hot Water', taken from the septet's forthcoming fifth album 'I'm In Your Mind Fuzz', is a prime example. Part 60s jam, part Unknown Mortal Orchestra-style underwater vocal (with a fair heap of flute twiddling doused on top), it comes on like Foxygen, if they stopped pissing about and actually wrote a coherent four-minute track for once. - NME