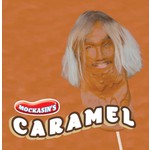 The Caramel Special Edition drips with extra sweetness, featuring alternate artwork and three new tracks including Do I Make You Feel Shy sung in Japanese by Connan.

Recorded in a hotel room in Tokyo, Connan Mockasin's sophomore effort is an attempt to make a record worthy of the title, Caramel. In the wrong hands this might sound like an unforgivably pretentious endeavour but in the nimble hands of Te Awanga's Connan Hosford it's resulted in a unique take on sleazy funk and RnB that is at once inspired, endearing and bizarre.

The record opens with 'Nothing Lasts Forever' a bluesy reworking of Mockasin's 'Forever Dolphin Love' before a pitched down vocal from Mockasin proclaims, "Welcome, this is caramel". While the intro works to tie the two pieces of work together conceptually, it also means the record gets off to a slow start. Caramel really hits its stride on 'I'm the man that will find you', a joyful banger that is coupled with the equally flirty 'Do I Make You Feel Shy?'.

Like many of his contemporaries (Ruban Neilson's Unknown Mortal Orchestra and Ariel Pink serve as good touch stones), Mockasin uses a DIY minimal production approach to re-imagine the psychedelic music of the past. Sonically, Caramel is a triumph for Mockasin. It's every bit the shimmering, smooth record you would expect from its title.

But as with much of Mockasin's work, there is something unsettling beneath Caramel's slick exterior. Fans looking for an album's worth of pop gems may be a tad disappointed. More than half of the album is made up of vocal-less slow jams, and Jimi Hendrix circa Electric Ladyland sound improv that is as likely to please fans of Connan's virtuosic guitar playing as it is to alienate others for being self indulgent.

This LP includes an MP3 voucher.

"Summoning up the spirit of psych soul, Te Awanga's finest commandeered a Tokyo hotel room to record this mutated, woozy, intimate confection that could only sound slightly normal after a debut like Forever Dolphin Love."
NZ Listener (Best of 2013)

"By the time album closer 'I Wanna Roll With You' even the most prudish of listeners would find it hard to resist Caramel's seductive charm. This is music for the sleaze in all of us."
8.5 /10 Under The Radar