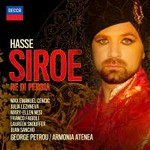 The world-premiere recording of Siroe re di Persia by Johann Adolf Hasse, whose music encapsulates the refined aristocratic cultural tastes of the European Ancien Régime. Offering true musical fireworks and delights, Siroe is led by Max Cencic in the title role with the vital orchestra of Armonia Atenea and their high-powered conductor, George Petrou: the same vibrant partnership which saw their first album on Decca, Handel's Alessandro, win a clutch of top awards. Renowned for his gifts as a melodist, in Siroe Hasse offers a feast of rare vocal delights in the telling of a vivid story of passion, jealousy and intrigue.

Remarkably famous during his lifetime, the composer Hasse was acclaimed by his contemporaries as one of the most important artists of the 18th Century: the greatest singers of the time clamoured to perform in his operas.

Max Cencic & Parnassus Arts' new stage production of Siroe premiered in June 2014 at Athens' Megaron to enthusiastic acclaim from audience and critics alike, and will tour to Versailles and Vienna.

"the cast seems unfazed by the technical challenges, though there's rather more bravura than refinement...the soprano Julia Lezhneva shows that it is possible to negotiate Hasse's vocal writing with stylishness and beauty of tone as well as accuracy." (Guardian)

"This is the sort of premium opera recording that has become increasingly rare. So ignore the critics who have observed that Hasse is not as good as Handel - who is? This work has some fascinating things in it, and all concerned do it proud. Above all, we have here something close to the acme of baroque opera singing in the current era." (Recording of the Month MusicWeb March 2015)