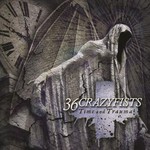 Like a once frozen phoenix blazing through ten miles of suffocating ice, 36 Crazyfists arises in triumph. They are in the throes of career resurgence, a type of rebirth that can only be conceived in the fieriest of trials. This is one of the most important bands of the New Wave Of American Metal, keepers of a flame that might otherwise be extinguished. And they charge into 2015 holding that torch proudly aloft.

Time And Trauma arrives with all of the thunder one should expect from a band celebrating their 20th anniversary, emboldened by new management, a brand new label home with Spinefarm Records and the most aggressively focused, incessantly personal and relentlessly urgent full-length album of their double decade existence.

"This album represents exactly who we are, what we sound like, and what we've worked so hard to create over all of these years," says vocalist and cofounder Brock Lindow. "We've never wanted to be run-of-the-mill, or to run with the pack. It's important for us to have our own identity. This album certainly gets back to that."

Time And Trauma deals with the most important subject matter of the band's storied history, while offering the most focused and purely 36 Crazyfists anthems they've ever released. Passing the 20-year mark, they're as enthusiastic as ever about traveling, about performing and about connecting with as many people as possible.