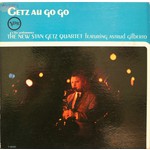 Although the name Stan Getz (tenor sax) was initially synonymous with the West Coast cool scene during the mid-to-late 1950s, he likewise became a key component in the Bossa Nova craze of the early 1960s. Getz Au Go Go (1965) is Stan Getz in his prime, recorded with perhaps one of the best quartets of his career, featuring Bossa Nova singer Astrud Gilberto.