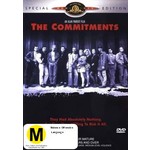 An irresistible, comic drama from director Alan Parker (Evita, Mississippi Burning), overflowing and alive with passion, humor, and music, The Commitments showcases some old R&B standards in a new light. A headstrong, fast-talking, ambitious young Dubliner (Robert Arkins) fancies himself a promoter of talent, and sets about assembling and packaging a local Irish R&B band. His group of self-absorbed, backbiting, but stunningly talented individuals begin to succeed beyond his wildest dreams, until petty jealousies and recrimination threaten to scuttle the whole deal. A moody, vivid, and soulful exploration of the Dublin club scene as well as a showcase for some wonderful unknown actors, the film (and its wonderful soundtrack) also features the actual band covering classic soul tunes from the likes of Otis Redding and Sam and Dave. It's that combination of soul and soul music that makes The Commitments a special little film.