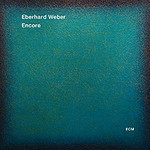 Encore is a companion volume to Résumé the widely-praised solo album issued in 2011. Eberhard Weber returns once more to the many live recordings of his tenure with the Jan Garbarek Group, isolating his bass solos and reworking them into new pieces with the addition of his own keyboard parts. "I became what you might call a composer of New Music," says Weber, "with the proviso that I make use of old things."This season's special guest is veteran Dutch flugelhorn player Ack van Rooyen. Van Rooyen, who played on Weber's ECM leader date, The Colours of Chloë more than 40 years ago now adds his own subtle colours to Weber's contemporary sound-montages. The bass solos were recorded between 1990 and 2007, in thirteen European cities, from Edinburgh to Seville, and the music was mixed and edited at Studios La Buissonne in the South of France in November 2014.