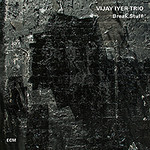 "Break Stuff" is what happens after formal elements have been addressed. Vijay Iyer calls the break "a span of time in which to act. It's the basis for breakdowns, breakbeats, and break dancing... it can be the moment when everything comes to life." A number of the pieces here are breakdowns of other Iyer constructions. Some are from a suite premiered at New York's Museum of Modern Art, some derive from Open City, a collaboration with novelist Teju Cole and large ensemble. The trio energetically recasts everything it touches. "Hood" is a tribute to Detroit techno pioneer Robert Hood. On "Work", Vijay pays homage to his "number one hero", Thelonious Monk. "Countdown" reconsiders the classic Coltrane tune inside a rhythmic framework inspired by West African music. "Mystery Woman" is driven by compound pulses which owe a debt to South Indian drumming. Fast moving and quick-witted, the group has developed a strong musical identity of its own, with an emphasis on what Iyer calls "co-constructing", exploring all the dynamics of playing together. Yet the three players also get abundant solo space and, in a reflective moment at the album's centre, Iyer plays a moving version of Billy Strayhorn's "Blood Count" alone. Break Stuff, recorded in June 2014 at New York's Avatar Studio and produced by Manfred Eicher, is the third ECM release from Vijay Iyer. It follows the chamber music recording Mutations and the film-and-music project Radhe Radhe: Rites of Holi.