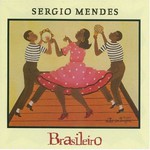 What 1989's Arara hinted at, 1991's Brasileiro delivers with a vengeance, for at long last, here is a genuine, back-to-Brazil tour de force by expatriate Mendes. Taking up the long-abandoned thread of his prophetic Primal Roots album of 1972, Mendes went back to the taproots of his heritage, calling upon a plethora of explosive Brazilian rhythms and sounds recorded mostly in Brazil. Though he returned to California to pile on additional tracks from L.A. sessionmen and give the production a finished sheen, there is no sense of any watering down; the thrust of the music bears the added weight and polish easily. With the rat-a-tat opening of thunderous Bahian-influenced percussion from the streets of Rio, "Fanfarra (Cabua-Le-Le)" gets the CD off to a tremendous start, and "Magalenha" continues the assault directly from the hands of Bahian percussionists. Energetic fusions of this and that abound on this recording. Combining forro and samba reggae with Indiado stomps and shouts (the convincing horn riffs are performed on synths), "What Is This" -- good question -- is a romping Bahian take on hip-hop, and "Kalimba" grafts Portuguese vocals onto a swinging American funk groove. Mendes once again draws upon the giants and comers of Brazilian songwriting -- Ivan Lins, Gilberto Gil, Joao Bosco, Carlinhos Brown, and Guinga -- and the unusual 3/4-meter samba "Pipoca" is the creation of do-everything mystery man Hermeto Pascoal. Dominating the signature Mendes vocal blend is Gracinha Leporace (Mrs. Mendes), who sounds more vibrant than ever on these tracks, and bassist Sebastian Neto also returns to the Mendes fold. This was Mendes' most electrifying album in at least two decades; you have to go back all the way to -- well -- Primal Roots to hear this artist operating at such a peak. - AllMusic