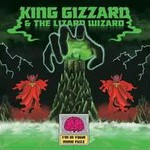 King Gizzard & The Lizard Wizard
I'm in your mind fuzz

Arriving just eight months after the amiable Aussie psych-rockers' Oddments LP, I'm in Your Mind Fuzz finds King Gizzard & the Lizard Wizard doing what they do best: Simultaneously assembling and dissembling semi-epic blasts of early Flaming Lips, 13th Floor Elevators, the High Strung, Thee Oh Sees, and Dungen-esque space/psych rock and having a great time while doing so. Opener "I'm in Your Mind" is a churning, Krautrock-inspired, largely stream of consciousness-driven road anthem that takes up the first half of the album the ensuing "I'm Not in your Mind," "Cellophane," and "I'm in Your Mind Fuzz" are mere mile markers, and it serves as an excellent litmus test for listeners wondering how far into the fuzzy, fidelity-challenged, multi-colored waters they're willing to wade. The back half of the record is a tad more diverse, with highlights arriving via the loopy, beatnik-blasted "Hot Water," the epic pop posturing of "Her and I Slow Jam 2," and the fractured "Satan Speed Up," the latter of which sounds like a lo-fi amalgamation of Led Zeppelin's "The Rain Song" and anything off of MGMT's Congratulations. The band's overall distaste for sound quality will probably put some listeners off, as much of the record sounds like it was recorded in real time on an old Tascam four-track in somebody's basement, but King Gizzard & the Lizard Wizard possess enough pop acumen and oddball charm to lure even the most unsuspecting psych-rock fan downstairs for a taste. Whether or not they'll stay for dinner is open for debate. [I'm in Your Mind Fuzz was also released on LP.] (AllMusic)