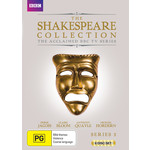 In 1978, the BBC set itself the task of filming all of William Shakespeare's plays for television. The resulting productions, renowned for their loyalty to the text, utilised the best theatrical and television directors and brought great performances from leading contemporary actors.

Henry V: Insulted by the Dauphin, the newly-crowned King Henry V gathers his troops for war. But Henry must convince his men that he has left his wild days behind, and prove himself as a leader.Henry V tells a tale of intrigue and betrayal, courtly romance, and a heroic battle against outrageous odds. The lead, played here by David Gwillim, is one of the most coveted of roles with inspiring lines including the St Crispin's Day speech.

Henry IV Part One: One of Shakespeare's most celebrated dramatic achievements, this play mixes history and comedy effortlessly, moving from scenes of royalty to rough drinking dens with ease. This production matches its superb characters with great actors particularly evident in Anthony Quayle's magnificent Falstaff.

Henry IV Part Two: Retaining the same cast and director as Part One, this production assuredly charts the transformation of the Prince. It reflects the play's darker and more intimate focus, but contrasts it with colourful scenes from Falstaff's Eastcheap as well as the bucolic Gloucestershire of Shallow and Silence.

Hamlet: Derek Jacobi's portrayal of the Prince of Denmark is often seen as the benchmark for performances of the most complex of all Shakespearian characters. The Los Angeles Times reported: "The stage belongs to Jacobi and, in a performance that grows as he plays it, he's a Hamlet you will not soon forget."

The Tempest: The quality cast of this production help bring to life the magic and intrigue of a tale of spirits, sorcery, monsters and maidens and shipwrecked, scheming noblemen. In what is regarded as his final sole-authored play, Shakespeare, at the height of his powers, deftly explores the contrasting themes of control and power, illusion and reality and nature and society.

Twelfth Night: Perhaps the most popular of Shakespeare's comedies, Twelfth Night considers the nature of love: true love, self-love and friendship. This star-filled production won great acclaim for its energy and for its inclusion of the play's often overlooked darker elements.

This unique collection has some of the finest dramas in the English language, each production a celebration of the greatest talents in contemporary British theatre and television. These plays feature the cream of the 20th century's acting talent.