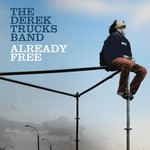 On Already Free (2009), the ninth studio album by The Derek Trucks Band, the band has had more time to mature, and the album's sound is more balanced between the different contributions of its members, who developed its overall effect as they arranged the songs that were recorded for this album. The album marks the band's highest debut on the Billboard Top 200 chart to date. The album won the 2010 Grammy Award for Best Contemporary Blues Album.

For 12 years, the Derek Trucks Band have been issuing records (live and studio) that are long on fire, improvisation, and inspiration. Trucks' own skillful leadership has seamlessly melded rock, blues, jazz, and Eastern Indian modal music in a brew that is uniquely his own. Perhaps this is what makes Already Free both an anomaly and a natural extension of the DTB; if anything, it resembles Delaney & Bonnie's records of the late '60s and early '70s -- Home, To Bonnie from Delaney -- or the self-titled debuts of Bobby Whitlock and Eric Clapton. There is a homegrown organic looseness to these proceedings that sets the album apart from all of Trucks' previous offerings. Perhaps that's because it was recorded at home -- literally in a home studio with the DTB and/or their guests playing live from the floor much of the time. Trucks is still accompanied by his longtime mates: Kofi Burbridge, Todd Smallie, Yonrico Scott, Count Mbutu, and vocalist Mike Mattison. But there are some close friends and family as guests, including -- but not limited to -- Trucks' wife Susan Tedeschi, Doyle Bramhall II, and a horn section and various rhythm players.

The material is stellar. The covers include an opening reading of Bob Dylan's "Down in the Flood," with the horn section getting down deep into the grittier and bluesier aspects of the tune. It features some brilliant work by Burbridge on the clavinet, Wurlitzer piano, and B-3; Trucks handles monster acoustic and electric slide work and Mattison's vocal is stellar. It all comes off soulfully, authentically, and utterly real. Next is a deeply funky cover of the late Paul Pena's "Something to Make You Happy." Another standout is a gospel-blues reading of the Spooner Oldham-Dan Penn classic "Sweet Inspiration," with an intro that sounds like it came straight from Memphis. Mattison and Tedeschi's vocals don't sound like Delaney & Bonnie's, but they feel like them. The hand percussion laid on top of the rhythm section with Trucks' melodic slide break becomes a third voice as it digs directly into the B-3.

That all said, the originals are solid to boot. Check out the funky Allen Toussaint-esque rhythm backdrop on "Maybe This Time," with a brilliant vocal performance by Bramhall; the savage, gritty, and greasy slide blues of "Don't Miss Me," with its twin guitar interplay; and the raucous house-rocking groove of "Get What You Deserve." Tedeschi takes a lead vocal turn on the deeply moving ballad "Back Where I Started," near the album's end. It was co-written by Trucks with Warren Haynes; only her husband backs her on acoustic guitar and dobro, with a rhythm section. The droning Indian instrument ushers in "I Know," an old R&B shouter associated with Big Maybelle. But Trucks' electric slide, the B-3, the horns, and Mattison's gravelly soul vocal add to its dimension quickly and convincingly. In sum, this is another side of the DTB, but one that feels like a natural extension of the group's live persona. Its careful attention to feel creates a vibe that is altogether missing from the vast majority of recordings made in the last 30 years, yet it sounds timeless -- not retro -- because of the expert, tasteful nature of the playing and recording. Already Free is not only an excellent entry in the Trucks catalog; it's a stone killer that should be filed with the aforementioned titles, the first two Black Crowes records, the Faces' A Nod Is as Good as a Wink...to a Blind Horse, and Rod Stewart's Mercury material.
4 / 5 All Music Guide.

Side One:
1 Down In The Flood
2 Something To Make You Happy
3 Maybe This Time

Side Two:
1 Sweet Inspiration
2 Don't Miss Me
3 Get What You Deserve

Side Three:
1 Our Love
2 Down Don't Bother Me
3 Days Is Almost Gone

Side Four:
1 Back Where I Started
2 I Know
3 Already Free