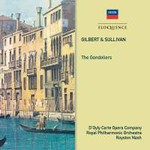 The Gondoliers is the sunniest of all the Gilbert and Sullivan comic operas, and was one of the most harmonious collaborations between two such temperamentally incompatible yet artistically well-matched men. The morning after the rapturously received opening night in December 1889, Gilbert wrote to Sullivan: 'I must thank you for the magnificent work you have put into the piece. It gives one the chance of shining through the twentieth century [and beyond!] with a reflected light.' Sullivan's reply was equally gushing: 'In such a perfect book as The Gondoliers you shone with an individual brilliancy which no other writer can hope to attain.'

This recording, made in February 1977, and receiving its first release on CD, was one of the last the original D'Oyly Carte Opera Company made before it was disbanded in 1982. Preserving its unique performing tradition dating from the original productions of the Savoy Operas, the company set down invaluable records of performances from almost every era of its existence (though, sadly, there is little from the original stars of the Savoy, when recording technology was still in its infancy). The company first recorded The Gondoliers complete in 1927; this is its fourth set, the second in stereo.