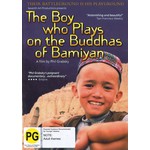 The Boy Who Plays on the Buddhas of Bamiyan

For over 25 years, Afghanistan has been at war. Over two million civilians have been killed. In March 2001, the ruling Taliban destroyed the tallest stone statues in the world, the 'Buddhas of Bamiyan'. Over the course of a year, this film follows the story of one of the refugees who now lives in a cave among the ruins…an 8-year-old boy called Mir.

British film-maker Phil Grabsky travelled alone to central Afghanistan a few months after the fall of the Taliban. His aim was to produce a cinema film that would explore the lives of ordinary Afghans. One young boy caught the film-maker's eye. Mir is ever-optimistic; a smile always on his face. He is cheeky, inquisitive and full of humour. And yet, when the film starts he is living on bread and water, and owns nothing - not one toy or book.

Through summer, winter and spring we follow Mir's life - the scrapes, the fun and the naughtiness - against the magnificent backdrop of Bamiyan and its ruined statues. As Mir grows, the adults around him reveal what life has been like over the past two decades, a period in which hundreds of thousands of children like Mir have been killed.

"The survival of refugees is matched to stunning landscape photography … haunting." - Sight and Sound