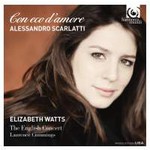 With a voice described as "one of the most beautiful Britain has seen in a generation" (IRR), Elizabeth Watts has established herself among the brightest talents performing today. After training as a chorister at Norwich Cathedral, Elizabeth went on to study archaeology at Sheffield University before attending the Royal College of Music in London.

Her many prizes include the 2006 Kathleen Ferrier Prize (UK), the 2007 Outstanding Young Artist Award at the Cannes MIDEM Classique Awards and the Rosenblatt Recital Song Prize at the 2007 BBC Cardiff Singer of the World Competition. A former 'BBC New Generation Artist', she received a Borletti-Buitoni Trust Award in 2011 and this recording is supported by the Trust. Her critically praised debut recording of Schubert Lieder was followed by an equally acclaimed disc of Bach Cantatas (harmonia mundi), a programme of Richard Strauss Lieder with Roger Vignoles, and a recording of Bach's St Matthew Passion with the Academy of Ancient Music led by Richard Egarr.

In this selection of rarely heard Alessandro [rather than Domenico] Scarlatti arias from his cantatas, oratorios and operas, she is joined by the acclaimed period instrument ensemble The English Concert led by Laurence Cummings. Elizabeth is currently recording Couperin's 'Lecons de Tenebres' with Lucy Crowe and La Nuova Musica for harmonia mundi.

"Golden-voiced soprano Elizabeth Watts has spent the past few years unearthing neglected arias by Alessandro Scarlatti...Watts just about gets away with the spectacular pyrotechnics but is most affecting when Scarlatti takes his foot off the accelerator." (The Observer)

"this is exciting music, revealing an enormous range of colour and emotions through both scoring and vocal line. Watts grabs every opportunity with a voice of perfect weight, pliancy and line, offering a solid middle balanced with an exciting top." (Opera Now)

"From the thrilling opening 'Figlio! Tiranno!', where the long-suffering Griselda veers between outrage and aching maternal tenderness, Watts seeks to create specific, individual characters rather than a series of generic portraits. As a sample, try the aria with trumpet (the ever-excellent Mark Bennett) from Endimione e Cintia: not only a riot of competitive virtuosity but here also a vivid expression of human feeling." Gramophone Magazine - Editor's Choice - October 2015

Blow: An Ode on the Death of Mr Henry Purcell & other works