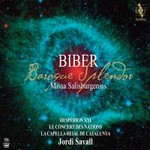 The Missa Salisburgensis is a wonderful work which any lover of the baroque should enjoy.

The 'Missa Salisburgensis à 53 voci' (in comparison, 'Spem in alium' was written by Thomas Tallis for «only» 40 voices) is perhaps the largest-scale piece of extant sacred Baroque music, an archetypical work of the Colossal Baroque. It is a polychoral composition which takes advantage of the multiple organs and various locations available for groups of singers and musicians to perform in Salzburg Cathedral, probably for the 1682 celebrations marking the 1100th anniversary of the founding of the Archbishopric of Salzburg. This stunning recording features Jordi Savall's ensembles at their best and fully reveals the «splendour» of this masterpiece. A recording of cosmic proportions that Jordi Savall has decided to illustrate with a celestial image of the Helix Nebula. Nothing less.

"Savall rallies his ensembles to scale the exultant heights but still keeps things nimble; the full ensemble sound is warm, vibrant and spacious, while shapely solo voices make clear work of all that counterpoint...Savall is in his element [in Battalia], leading the dance with supple, graceful swing." (The Guardian)

"an ingenious balancing act between solo voices, choirs and brass, particularly in the ensemble developments of the Gloria and the lengthy Credo, with its shift from angelic high voices to deep, sorrowful ones as the crucifixion weighs heavily." (The Independent)

"[a] superb new recording … The venue chosen for this recording - the Romanesque chapel of Cardona Castle in Catalonia - also possesses generous reverberation, but Savall knows how to capitalise on it, allowing the music to bloom and blaze but also to withdraw intimately into itself … the overall impression of sumptuousness certainly lives up to the CD's Baroque Splendour title." (Daily Telegraph)

"This is Biber in gargantuan mode … superbly recorded. Groups ranging from solo voices with a pair of recorders to the full ensemble complete with brass and drums are thrown across the huge spaces of the chapel with palpable excitement and thrilling effect. The reverberation lasts over five seconds, yet every detail in the small scale passages is crystal clear, and the sheer weight of the full forces is shattering." (BBC Music)