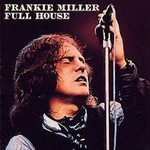 Full House is the fourth studio album by Frankie Miller, released in 1977. A little more funky than most of his albums but overall, this is another fine batch of songs. The Andy Fraser composition "Be Good to Yourself" was issued as a single, and reached No. 27 the UK singles chart, becoming Miller's first chart hit.
It features a mix of Miller originals and covers, including a version of John Lennon's "Jealous Guy". Of the five originals here, one was co-written by the man who discovered Miller (Robin Trower) and one of the songs was later covered by Lou Ann Barton.

SIDE B
1. Take Good Care Of Yourself
2. Down The Honkeytonk
3. This Love Of Mine
4. Let The Candlelight Shine
6. (I'll Never) Live In Vain