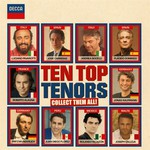 This 2CD album brings together ten of the most famous tenors, performing nearly 50 of the greatest arias of all time. It also features a 16-page booklet with everything you need to know about each tenor - nationality, short biography, best recording, trivia and more - in an appealing and witty design.